The Sumatran or hairy rhino (Dicerorhinus sumatrensis) is the smallest of the five rhino species. Official estimates suggest that there are fewer than 80 rhinos but many experts believe even that figure is overly optimistic, with some stating there could be as few as 30 animals surviving in the wild. They can be found in dense tropical forests on the island of Sumatra in Indonesia and Sabah in Malaysia.

Sumatran rhinos are the only rhinos that are have hair all over their bodies. Their hair is generally short and bristly in the wild, but it can grow to a shaggy coat in captivity since it is not rubbed off on vegetation. Just like the black rhino, they are browsers, using a prehensile upper lip to grasp leaves from a variety of plants. They are known to eat up to 60kg of food a day.

Fun fact: The Sumatran rhino is the oldest living land mammal and is the closest living relative to the famous woolly rhinoceros that lived in the frigid lands of Europe and Asia during past ice ages. 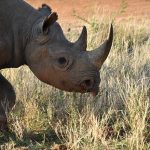 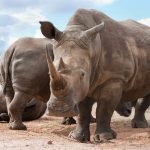 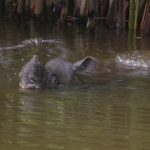 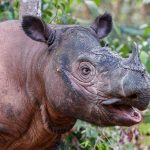