Rhino horn is in demand in China and Viet Nam primarily as a symbol of wealth and status, and is also used within Traditional Chinese Medicine. Poaching is now a threat in every country where rhinos live, however as South Africa is home to the majority of rhinos in the world, it has been heavily targeted. More than ever, field programs are having to invest heavily in anti-poaching activities.

Poachers are now being supplied by international criminal gangs with sophisticated equipment to track and kill rhinos. Frequently a tranquilizer gun is used to ‘bring the rhino down’ before its horn is hacked off, leaving the rhino to wake up and bleed to death very painfully and slowly. Poachers are often armed with guns themselves, making them extremely dangerous for the anti-poaching teams that put their lives on the line to protect rhinos.

The scarcity of rhinos today and the corresponding intermittent availability of rhino horn only drives the price of horn higher and higher, intensifying pressure on declining rhino populations. For people whose annual income is often far below the subsistence level, the opportunity to change one’s life by killing an animal that they don’t value is overwhelming. 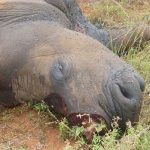 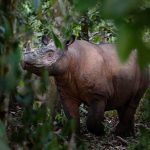 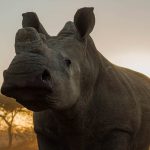